In this article, CBG craftsman Glenn Watt walks us through how he installs one of C. B. Gitty’s Basic Pre-Wired Piezo Harnesses (Product #50-014-01).

So you want to hear that new gitty you’re building through your amplifier that’s been sitting unused behind the holiday decorations in the basement? Do you want to make certain that you can crank that little bad rabbit when everyone leaves and you’re left to your own devices in a quiet home? Or maybe you’re looking to level-up and retro-fit a pickup into a guitar you already have that’s been sorely needing a little volume. In the Pre-Wired Piezo and Jack Harness from C.B. Gitty you have the simplest way to electrify your instrument with the most basic of installation requirements. 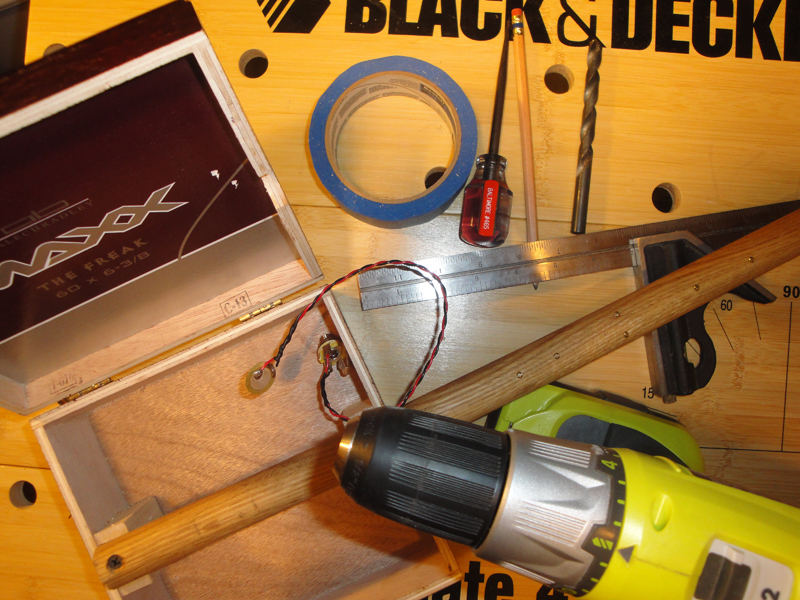 Step 1 – Figure out where to mount it

Start by determining where on your guitar you would most like to plug in the cord that will be coming from the amplifier. Be it on the front/face of the box/body or maybe on the bottom/tail-end, make certain that you plan for thejack to be in a spot that is convenient to get at, but which won’t be in the way when you are seated, or in the way of a guitar strap or the hand strumming/picking the instrument. 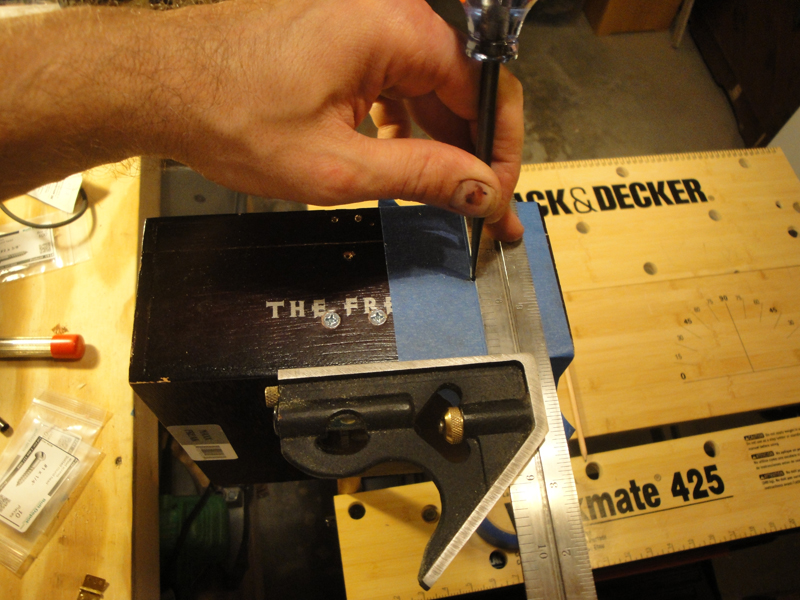 As you can see in the photo, on this instrument I have chosen to place the hole for the jack on the tail-end of the box. Also, to avoid unwanted marks all over a project, I have applied blue painters tape to the box to mark a hole to drill for the jack. After marking the location I used a scratch awl (any sharp, pointy object will do) to start a hole. This will help to prevent the drill bit from “walking”, which can lead to the hole not being as clean as it could be or exactly where I want it. Next I used a 3/8” drill bit to blast a hole in the box for the jack.

To fasten the jack I place the threaded rod of the jack through the new hole and from the outside of the box I place the washer over the threaded end and finally I screw on the nut. I used a ½” socket to get that puppy nice and tight – you don’t want it loosening up once the box is sealed shut. 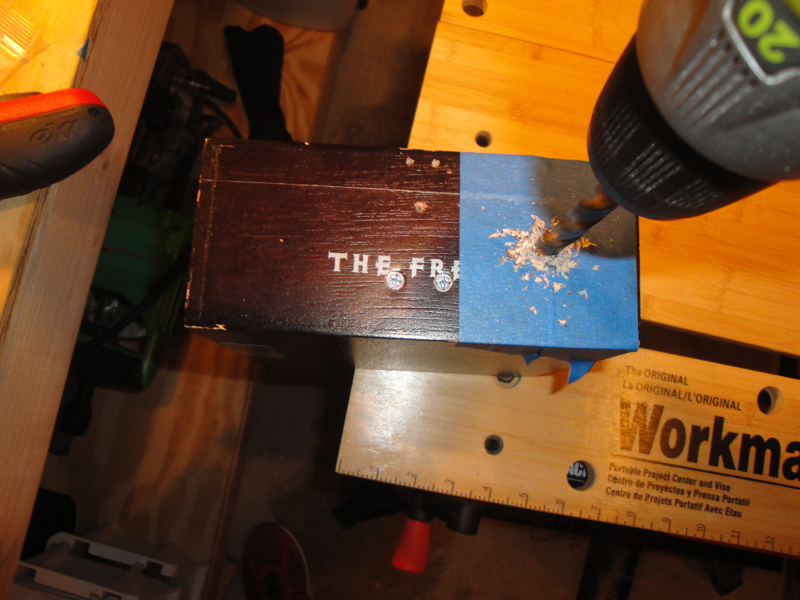 From the jack I ran the wires that connect to the piezo under the neck before gluing the piezo to the underside of the lid. By running the wire underneath the neck I am helping to prevent the wire from interfering with the space I want between the lid/top of the box and the neck when the box is closed. That space allows for the lid to vibrate and to create greater resonance for the instrument to be heard especially when it is unplugged (not that there will ever be an occasion when your guitar shouldn’t be cranked after this project).

If you are unable to do as I have described because of the design of your gitty don’t fret – it is not essential to place the piezo where I have. You can glue it wherever you want and it will pick up plenty of sound. I am providing you with an example installation that has worked for me on many occasions but is not a hard and fast rule. Remember: building a cigar box guitar is a personal adventure and one should never be afraid to experiment. 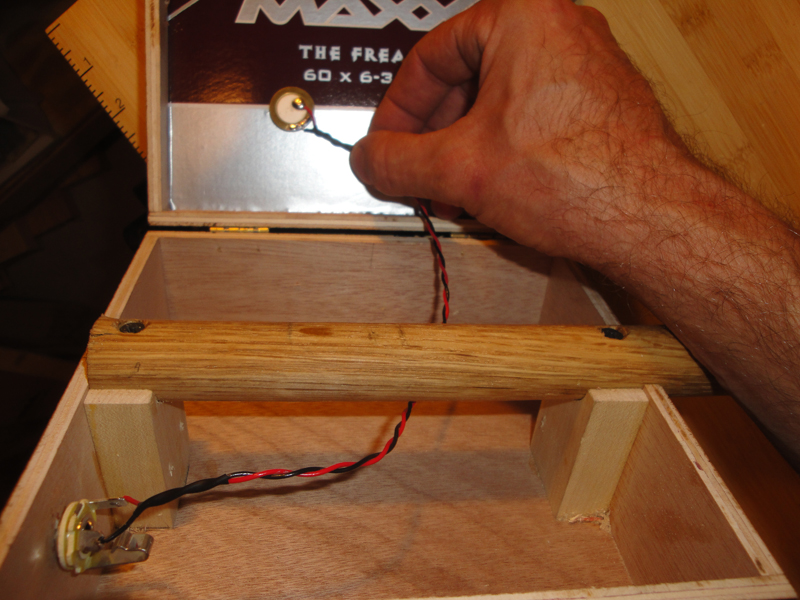 Step 4 – Glue on the piezo disk

On the underside of the lid I marked out the general area of where the bridge will be located on the other side (top) of the box lid. The piezo is an extraordinarily sensitive thing and will pick up nearly any bump or scratch on the instrument while plugged in. In order to maximize its potential I prefer to glue it as close to the bridge as possible and on the side of the lower-pitch (bass) strings rather than the higher strings. That is all personal preference and you may choose a different approach.

I apply enough hot glue to the intended location for the piezo to act as a sort of cushion to help to reduce just a smidge of the piezo’s sensitivity and then place the piezo in the glue. While holding the wires to keep the piezo from sliding out of the bed of glue I cover it with enough hot-glue to encase the pickup. I gotta continue to stand there and hold the wire so that the piezo doesn’t get all squirrely and slide its way out of the hot-glue nest I have made for it. While waiting for the glue to dry is a little uneventful, it gives me time to imagine how awesome I am going to sound while standing in front of the mirror cranking out some gritty gitty tunes.

After the glue has finished doing its thing I close up the box and carry on with finishing the project so I can get back to “real life” before it comes looking for me wondering why the dishes aren’t done.

It really is that easy. Drill a hole, screw the jack into place and glue down the piezo. Voila! You have an E-lectric guitar! Now go plug that thing in and turn it up to eleven.