One of the most frequent questions we hear from new cigar box guitar builders is what strings they should use on their cigar box guitar, and how they should tune it. This can be very mysterious for a builder, especially folks without a background in music. While it is often said that there are no rules when it comes to building CBGS (and that is often true, which is one of the great things about this hobby), it can be frustrating to hear when you just want a simple answer to a question. In this article, we’ll try to demystify some of the theory behind strings and tunings, and also give some straightforward, clear answers for those who just want to know what to do. 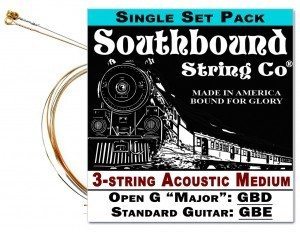 First, we’ll give a clear answer for those of you who just want to know what to do: at C. B. Gitty Crafter Supply we consider a “standard” cigar box guitar to be a 3-stringer with medium-gauge acoustic strings tuned to either Open G (for slide playing), or G-B-E for fretted playing. The strings used are equivalent to the three highest-pitched strings on a standard six-string guitar, and the scale length of the instrument (the distance from the nut to the bridge) is around 25 inches.

This happens to be the most popular set of CBG strings we sell in our shop – our C. B. Gitty 3-String Acoustic Medium Open G/Standard Set. If you are building your first cigar box guitar and have no idea what to do or what you need, start with these strings. These strings are based on a “medium” weight set sold for a standard 6-string but include only the 3 highest-pitch strings (the smallest/lightest ones) from the pack, so you don’t have any leftovers. It can be tuned either in “Open G” for slide playing (G-B-D) or if you have a fretted neck it can be tuned like the 3 highest-pitch strings of a standard guitar (G-B-E).

Once you are ready to move beyond the 3-string Open G/Standard Guitar set listed above, the choices start. These choices range from string weight (from heavy to extra light) to the number of strings (anywhere from 2 to 6), to string type acoustic vs. electric (bronze wound vs. nickel wound). There are even more advanced choices that can be made, such as stainless steel instead of plain steel, but we’re going to keep it simple here in this article and deal with each of these choices in turn.

Click Here to see all of our available Cigar Box Guitar string sets!

This refers to how “heavy” the strings you decide to use on your build are. If you look at standard 6-string guitar sets, you will quickly see that they are offered in a range of weights from heavy to extra light, with the middle-of-the-road choice being (usually) referred to as “medium”. The weight of the string really refers to the gauge, or thickness, of the strings in the set. A heavier set will use thicker, fatter strings, and a lighter set will use thinner, lighter strings. The idea here is that larger strings have to be pulled tighter to get them to pitch; this extra tightness creates more tension and downward pressure on the soundboard, which results (up to a point) in more volume from the instrument. Of course, this can be taken too far, and if the string tension gets to be more than the construction of the instrument can handle, horrible things accompanied by the sound of cracking wood occur.

For cigar box guitars, our recommendation is to stay somewhere in the medium to the extra light range for acoustics and in the “light” range for electrics. The main thing to consider when deciding between medium and extra light is the strength of your neck and how many strings you are going to have. String tension is what causes necks to bow. So if you have a pine 1×2″ neck with no bracing, truss rod or laminated fretboard, and you want to put a set of 6 standard guitar strings on it, you are going to end up with something that looks like a hunting bow, if not two pieces of broken neck.

For softwood necks (which is really not recommended to begin with), you will want the lightest strings you can get. For hardwood necks on 3 or 4-string instruments, medium should be fine (though tending towards the lighter side is usually recommended). If you have glued on a laminated fretboard, then your neck will be even stronger. If you have put in a truss rod, then you should be good to go with anything.

As with most things CBG-related, the general rule of thumb is: try it and see. If you put on medium strings and your neck bows too much, take them back off and use extra-light strings. A good tip here is to never trim your strings off at the tuners until you are absolutely sure they are the right strings. Leaving that extra length means you can take them back off and use them on another build.

We carry all of our acoustic string sets in both medium and extra light.

The vast majority of Cigar Box Guitars are made with 3 or 4 strings – you really need 3 strings or more to get the harmonic depth and range of pitches that makes a sound people associate with the concept of a guitar. One-string instruments are really more technically known as diddley bows, two-string instruments can be very interesting but are still pretty harmonically limited. Five string instruments are definitely possible but aren’t done that often, and six-string instruments generally are more advanced due to the higher string tensions and bracing requirements, so our focus here will be on 3 vs. 4 strings.

A lot of new CBG builders and players ask: what’s the difference? Why choose 4 strings over 3, or vice versa? Which one is better? The answer is: it’s up to you. Really it comes down to personal preference, but we will do our best to present some of the plusses and minuses of one versus the other.

Three-string CBGs have the benefit of being cheaper parts-wise, easier to build and less complicated to play. Less strings means less tension on the neck and risk of bowing; it means easier chords, with many requiring just one or two fingers; it means more harmonic simplicity to help a newer player keep from getting overwhelmed. And, it is seen by many (but not all!) CBG afficionados as being the more traditional and historically accurate setup. Whether or not you buy into that is up to you.

Four-string instruments present more possibilities when playing, whether you are playing slide style or fretted style. That extra string allows more advanced chords, richer and more complex harmonies, and more interesting tuning options (such as adding a 7th to the tuning so you have an open seventh chord for blues playing). The trade-off is that not everyone WANTS more complex playing options. Also, that extra string adds to the overall tension on the neck. Four strings is in the gray zone when it comes to unbraced necks – in other words, a neck without a truss rod. Generally you will be OK with an unbraced neck with four strings so long as you use a good strong hardwood like oak or maple. Gluing on a fret board made from another hardwood definitely helps strengthen up the neck as well. Usually we would recommend light or extra-light strings on an unbraced 4-string neck.

So in summary, the only real difference between 3 and 4 strings comes down to playing style. If you are a beginning builder or player, our recommendation would be to start with a 3 string and then think about a 4 (or more) string later.

We carry a nice selection of both 3 and 4-string sets in our online store! 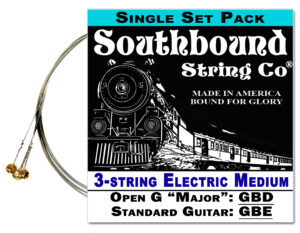 First, a bit of theory: let’s start by defining what we mean when we say acoustic and electric. By acoustic we mean builds that either have no electronic pickup in them at all (true acoustic) or those that have a PIEZO pickup only. Piezos react to (and pick up) acoustic vibrations in the instrument, so technically they are still an acoustic pickup.

By electric pickups, on the other hand, we mean a magnetic would pickup like the single and double-coil ones you find in a standard electric guitar. These pickups are comprised of magnets wrapped with copper wire, and instead of picking up acoustic vibrations they are excited electromagnetically by the steel in the strings.

Standard acoustic strings will work fine for both true acoustic CBGs as well as those that have a piezo pickup. The standard plain steel and bronze-wound strings do a great job of producing the soundboard vibrations that create the acoustic guitar sound we all recognize. We sell a variety of acoustic string sets for various tunings, in both medium and extra-light gauges, for both three and four-string CBGs. Nickel-wound electric strings will work fine with piezo pickups.

For magnetic electric pickups, however, a special type of wound string is needed. These strings consist of nickel windings over a steel core, which allows the magnetic pickup to “hear” them. Standard bronze-wound strings also have a steel core, and will generally also produce sound on a magnetic pickup, but many professional players prefer nickel-wound strings on electrics. In our experience it really comes down to a matter of taste and aesthetics.

The decision of whether to go true acoustic, piezo acoustic or true electric is one of taste and playing style, and could be the subject of an entirely separate article. For now, this summary should give you a basic starting point for understanding the differences.

We carry both three and four-string electric sets in our shop for those of you interested in exploring this option.

That completes our summary overview of choosing strings for your CBG. There are of course almost endless choices and variations you can make when it comes to strings and tunings. The best way to approach it, in our opinion, is to just start trying things. Try some different sets on your build, get an idea of what extra-light strings sound like as compared to medium strings. Try out an open D and see how it is different from the Open G. Or take a look at a standard set of guitar strings and try some different combinations to see what you can come up with. We will be adding more articles soon that cover some more advanced concepts related to different tuning, fretting and scale length concepts.