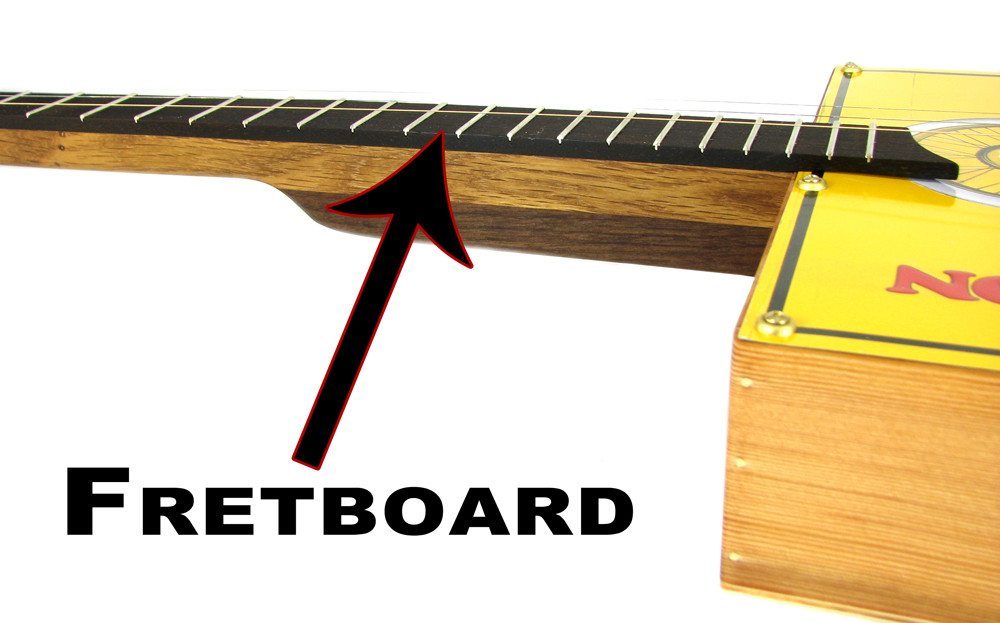 A fretboard is a thin piece of wood (usually in the range of 3/16″ to 5/16″ thick) that is glued to the top of a guitar neck, and which has metal frets mounted in it at predetermined spots. Fretboards both strengthen the neck, by adding an additional layer of wood, as well as making it easier for a cigar box guitar builder to “dial in” the string action height. Fretboards can be made out of pretty much any wood, though usually the harder hardwoods are preferred for durability. Rosewood and ebony are two woods traditionally preferred for fretboards in guitars, though cigar box guitar builders can and do make use of all sorts of other things. A fretboard usually is either placed right up against the nut at the top of the neck just below the headstock.

Fretboards may have additional decorative elements besides the frets, including either drawn on or inlaid fret location markers, side markers, decorative inlays and more. The most common frets to have marked on a fretboard are the third, fifth, seventh, ninth, twelfth, fifteenth, seventeenth, nineteenth, and on up in that pattern.

Sometimes on cigar box guitars, necks are fretted without having a separate fretboard glued on. Often this portion of the neck is still called the fretboard or fingerboard.