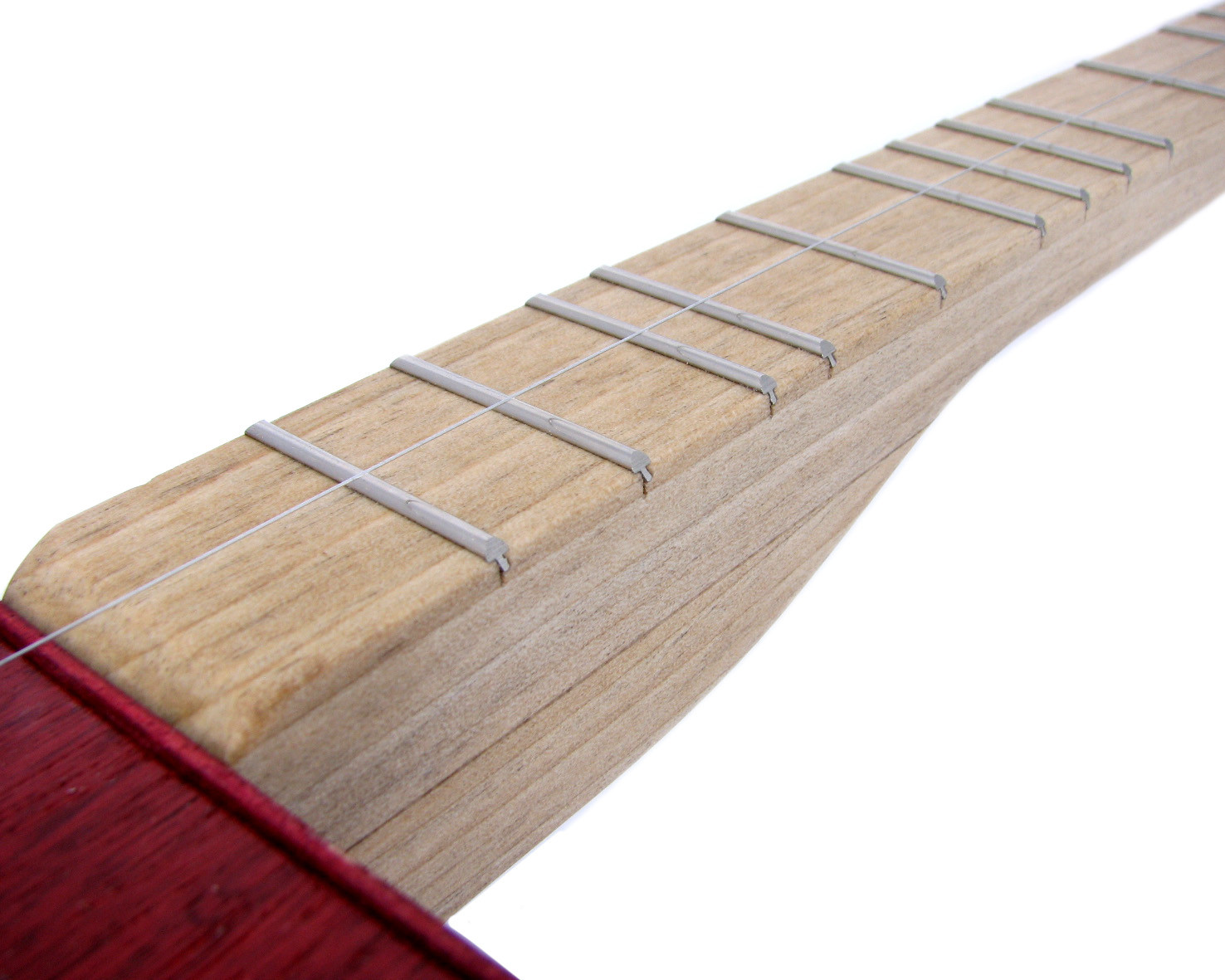 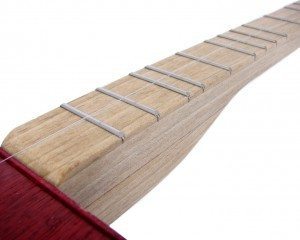 Most folks are familiar, at least by sight, with the six-string guitar – whether an acoustic guitar like a Martin or an electric guitar like a Fender Stratocaster™. So it is natural that when people think of frets, or a fretboard, they think of a guitar fretboard – an evenly distributed collection of frets that get closer together the further you go up the neck towards the guitar body.

First, let’s start with what Diatonic (Dulcimer) fretting is NOT…

On a standard guitar, like the Fender Strat mentioned above, or the cigar box guitar in the photo below, it is said to be fretted on a chromatic scale. We are not going to get into the theory behind what that means here, but just take away this tidbit: a chromatic scale, like on a standard guitar, allows you to play every note you could possibly need for a song. All of the sharps, “natural” notes and flats. It’s all in there, and if you aren’t sure of what you are doing it is pretty easy to hit a sharp or a flat when you don’t mean to, causing potentially jarring discordance.

The trade-off is that a chromatically fretted instrument gives you the most options when playing – you can play any song in any key (as long as you know where to put your fingers). It’s harder to play, but it puts all of the musical options at your fingertips. Literally.

Note in the photo of the cigar box guitar above, how the frets proceed up the neck towards the guitar body, with a slightly smaller space between each one. This is a chromatic fretboard, and it can be used to  play pretty much any song in any key.

Now, how Diatonic (Dulcimer) Fretting is different from Chromatic…

There are various other fretting layouts that have been used throughout the history of stringed instruments, but the most common variation to the chromatic style discussed above, is based on what is called the diatonic scale. This style of fretting is sometimes called “dulcimer fretting” because it is most frequently seen on dulcimer-style instruments.

Basically, in diatonic fretting the sharps and flats are left out, leaving only natural or “whole” notes. Think of the “DO RE MI” scale that kids learn. That is the diatonic scale, just the key notes of the scale with no sharp or flats in there to bung things up.

Check out the frets on the American Canjo Company canjo above. Notice how there are wider gaps between some of the frets, than there were on the chromatic fretboard above? That is because some of the frets have been left out – the frets that would have allowed the sharp and flat notes to be played.

The result is a fretboard that allows you to play DO-RE-MI-FA-SO-LA-TI-DO as you move up the neck one fret at a time. Using a diatonic fretting style can make it a lot easier to play basic songs, since there are less frets (and therefore notes) to choose from. The downside is that you are pretty much playing in one or two keys, and if the song you are playing happens to include a sharp or flat note that is not in the basic scale, you just won’t find it on your fretboard.

The graphic above gives you a side-by-side comparison of chromatic and diatonic fretboards of the same scale length. As you can see, on the diatonic fretboard some of the frets have been left out. We’ll discuss the dashed line frets (#10 and #22) below.

OK now about the dashed lines on frets #10 and #22. Adding that fret gives you what is often called the “blue note” of the dulcimer scale. To be technical, it is the flatted seventh note of the scale, and it lets you do two things:

So just by adding two extra frets, at the 10th and 22nd positions, you can effectively double the versatility of an instrument. On the downside, having that blue note on there does give you one more potential wrong note to hit, and the fact that it is not in the major “do re mi” scale of the instrument means that if you do hit it by accident, it will sound more discordant than the other notes on the instrument.

If you are uncertain whether or not to include the blue note frets, a good plan would be to not put them on your first build. Get used to playing the instrument with the diatonic fretting. If you feel you want to take your playing a little further, then build another one (or add the extra frets to your existing one, and go from there.

Hopefully this has given you a good idea of what diatonic/dulcimer fretting is, and why you might use it. To put it most simply, diatonic fretting makes an instrument easier to play, but less versatile overall. If you were building for an experienced musician used to guitars, you probably wouldn’t want to give them one with diatonic fretting. But if you are building an instrument for folks who don’t know how to play, or for kids, or elders, or just the general public who want to be able to quickly pick out a tune, diatonic can be a good option.

26 thoughts on “Diatonic (Dulcimer-Style) Fretting – What it is, How and Why to Use It”