Learn now to play both the melody and chords for Amazing Grace on 3-string Open GDG Cigar Box Guitars.

If you had to choose just one song as the anthem of Western Christianity, it would probably be Amazing Grace. The words to the song, written by English poet and clergyman John Newton, were first published in 1779. The words were first put to a tune around 1835, when William Walker began using an old traditional tune New Britain along with the words… and that is largely the same tune we use today.

In the centuries since its first publication, Amazing Grace has been arranged, re-arranged, performed, recorded and re-imagined uncounted thousands of times. It is a song that is truly in the public domain, part of the collective consciousness of large swaths of the modern world that have taken part in the Christian Tradition.

Glenn Watt and Ben “C. B. Gitty” Baker are creating a series of 3-string cigar box guitar tablature PDFs for this timeless song, which have begun to be released here on CigarBoxGuitar.com. These tablatures are released entirely into the public domain without advertisements, and with no need for attribution, copyright or branding of any kind. We believe this to be a song that belongs to the world, which no one person can claim to own, and we give our personal interpretations of it freely. We hope you enjoy it!

This version of the tablature gives you the song in its most basic melody form. Recommended for new players! Click the image below to view the printable PDF file. 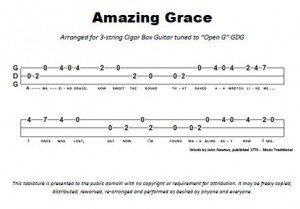 Here both the melody line and some chord accompaniment is given, for a fuller and more soulful sound. Some filler notes to lead up to and down to the main melody notes are also added to flesh out the tune. Click the image below to view the printable PDF file. 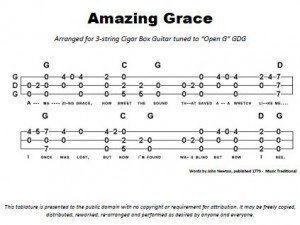