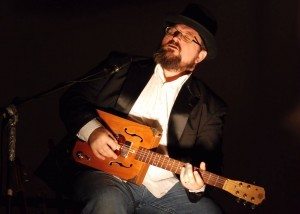 We just added a new entry to the library, an article telling the story of the man who is largely responsible for the existence of the modern cigar box guitar movement.

Shane Speal started building cigar box guitars in 1993, and from that time has been tirelessly promoting the instrument, performing onstage with them, and creating online communities to help people discover the instrument and start building their own. He took the title “King of the Cigar Box Guitar” back when such a title seemed full of irony – who would want to be the king of such a crazy, primitive, mostly forgotten instrument?

This article by Glenn Watt re-introduces Shane Speal to those who may never have heard of him. For 22 years he has been building, playing, and preaching cigar box guitars.

Click the image or link above to view the full article.