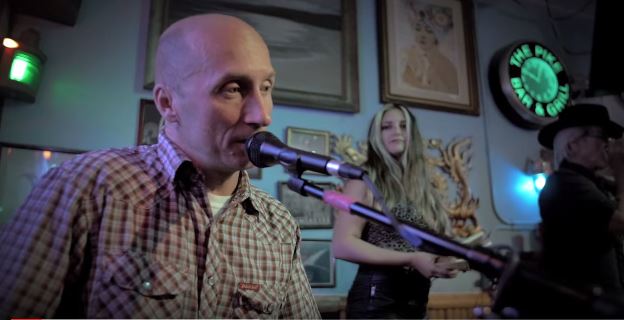 He didn’t start build cigar box guitars until 2007 but he was bit by the artistic bug much earlier in life. Jason Farthing was drawing his favorite super heroes as a wee lad which is something that ultimately led to his love for the visual arts. That love turned into some of the finest custom painted cigar box guitars one can find.

Jason went through university focusing on drawing and graphic design. He would eventually host art shows featuring his varied works, including his cigar box guitars. Jason was drawn to the simplicity and rawness of the instrument and he brought his flair for the aesthetic to the CBG.

Understanding that viewers of his work didn’t realize that each cigar box guitar was also a fully playable instrument, Jason began performing with them. In 2008 he enlisted the vocal stylings of his step-daughter and The Budrows had been born.

Jason plays his custom four string cigar box guitars along with a foot drum and foot tambourine. Macarena plays the washboard and both share the lead with vocals. A couple of years later they added a harmonica player [who, at the time of this writing, has retired].

This southern California trio began playing deep south, juke joint stomping music steeped with a heavy dose of Americana and has been playing ever since. Living the life of an artist, visual or otherwise, is a challenge. In order to make a living Jason sells his own cigar box guitar kits online as well as an array of amazing custom painted cigar boxes.

The Budrows have released two albums and continue to play, from southern California to the northeastern U.S., in bars, juke joints, festivals, and anywhere else that enjoys having a foot-stomping good time.

One thought on “Jason Farthing (The Budrows)”