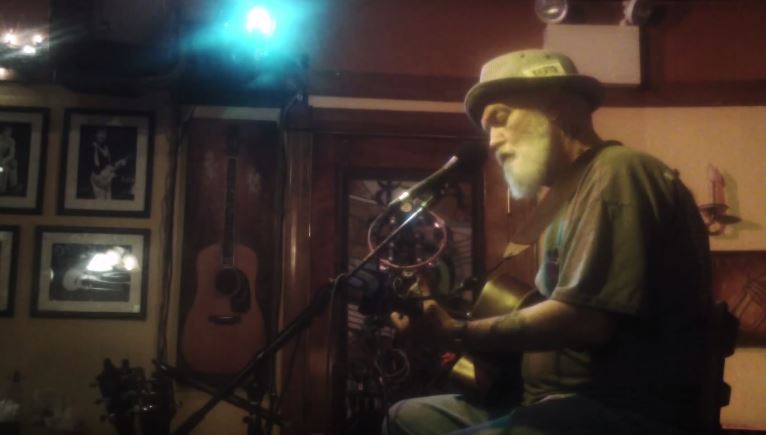 Even with music in the family, Gerry Thompson didn’t start playing music until well into adulthood. When he inherited an old banjo-lin from his father the wheels began to turn. However, the little strummer was sorely in need of work.

With a stroke of good fortune, Gerry had a neighbor who not only played guitar but could do a little work on them as well. That neighbor was the guitarist, Dave “Catfish” Mecca, of April Mae & the June Bugs. Dave lent Gerry a hand and Gerry had a banjo-lin to start playing music.

Gerry’s interest in playing stringed instruments soon turned to cigar box guitars. He stumbled upon CBGs while on the internet and found Shane Speal. Gerry reached out to Shane and a couple of other gents who gladly offered advice, direction, and encouragement.

He got to building and shortly after that, Gerry got to playing. For a long time Gerry had written poetry. Playing cigar box guitars gave him an outlet to shape his written word and with them songs were created.

While at a cigar box guitar festival in Kentucky, and with another stroke of good fortune on his side, Gerry was asked to perform on stage. The festival needed a performer and Gerry had his guitar. He had never performed for anyone before but got on stage anyway and found that he took to it rather naturally.

That performance launched Gerry into string of songwriting and festival performances. He’s got dozens of original tunes and continues to play out as often as he can. Gerry’s played at festivals in West Virginia, Alabama, and Pennsylvania. The travel from his home state of New Jersey doesn’t seem to slow him down. He looks forward to sharing his art with the crowds.

“Playing music is probably my favorite thing in life. It’s the only time I’m completely relaxed. […] It’s a great outlet. It takes everything away.” – Gerry Thompson from David Sutton’s book, Cigar Box Guitars: The Ultimate DIY Guide for Makers and Players of the Handmade Music Revolution