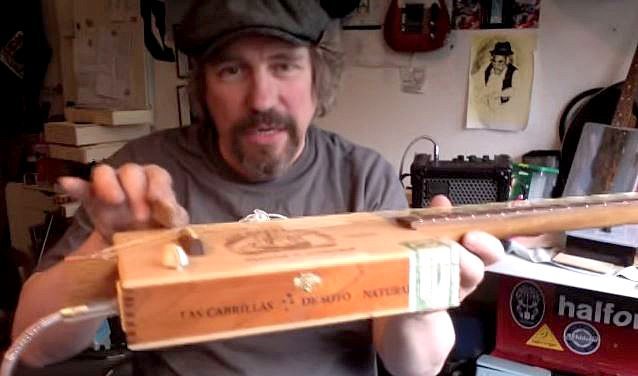 Englishman John Wormald began playing guitar in his teenage years. While in school he built his first solid body electric guitar. From there, although it would take some time to grow, John’s luthiery and performances would take on a storied life.

John played in bands in college, played with musicians who went on to find a bit of fame, and built guitars for other artists. And like many of us, life found John and directed his attention away from playing music and to work, marriage, and children.

After many moons, John sought out clubs and open-mics to get back out performing, rekindling his interest in slide guitar. Along with his interest in playing slide he wanted to get his hands on his own resonator guitar. This desire was sated after he found an old acoustic set out as trash.

John thought the guitar, which had chicken bones stuffed through the soundhole, an excellent candidate for refurbishing and converting into a resonator. John had also found his blues-name.

The following years were spent submerging himself  in the music scene, finding himself at home in blues and jazz clubs. In addition, he took to buying, fixing, and re-selling guitars from and on the internet. John became enamoured with fixer-upper and workaday guitars, the kind that kept in spirit with what old blues men used to play.

His luthiery, musical background, and passion for the authenticity of blues led John to embracing cigar box guitars. John began building and playing CBGs, and selling them as well. After stumbling across CigarBoxNation.com he found there is a worldwide community of people with their own approaches to building and playing CBGs. It was there that someone suggested a UK cigar box guitar event and John took the steps to make that happen.

Since then John has been playing live with his cigar box guitars, selling them online and direct at music festivals, and hosting workshops on how to build CBGs throughout Europe. Over the years, through direct contact and the internet, John has taught many people how to build and play cigar box guitars, continuing to be an ambassador for the movement.