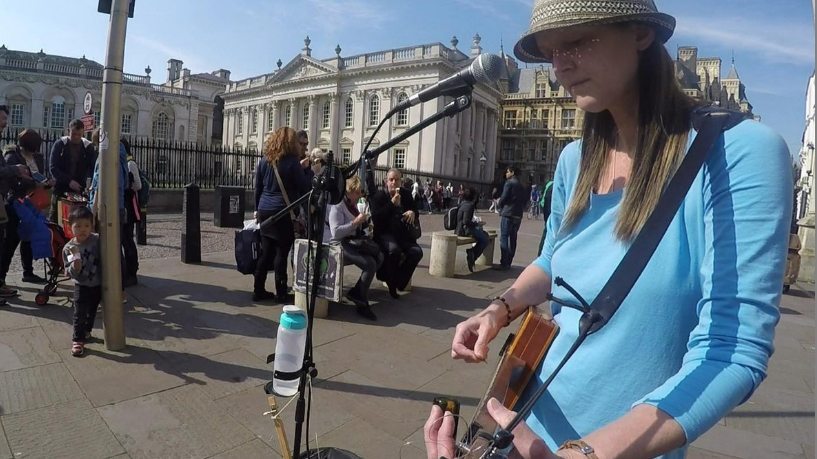 She doesn’t have a distinct recollection of how she was introduced to music, just that is was always around her growing up. Belinda Gent can’t even cite a particular musical influence in her family, but the spark to create was deep inside her.As a youth, Gent played the recorder in school and later taught herself a little piano. But her true desire was to play guitar. She wished hard for a guitar one Christmas. As a wanting youth will, Gent skillfully angled her parents towards a six string in a shop. Much to her dismay, the guitar as a gift was not meant to be.

Years later, shortly after hearing this story, Gent’s husband surprised her with the instrument she had wanted, and a guitar player was born. She learned to love the guitar but Gent always felt something was missing from the experience.

After the trials of life forced her to take a 20-year hiatus from playing a six string, in 2009 Gent discovered cigar box guitars. “…something about them totally clicked with me. I loved the sound straight away. Shane Speal’s lessons got me started, then I was off!” Gent loved the raw, simple nature of CBGs, and the music she could make with them.

Gent began writing songs of her own and, despite a healthy fear of singing in front of people, began busking. “I still can’t believe that I go out and sing on the streets, but I love it!” She credits the community on Cigar Box Nation for support in pursuing her desire to perform.

Playing one in front of strangers on the street isn’t the only passion she has for cigar box guitars. Again with help from the Cigar Box Nation community, Gent learned to build her own CBGs. And as soon as she’s done building a CBG, she’s quick to begin playing it. “Each new instrument I make has a different sound, and often that will spark off a song.

Across YouTube, Cigar Box Nation and a few other stops on the internet, one can find Gent performing in her eclectic style. She has a lovely voice, well suited to soft acoustic folk music but she plays much more than that. As Gent says, she’ll play “blues, folk, singer songwriter…sad songs, silly songs, whatever comes out! ”

Gent has not only built her own CBGs, and regularly performed in public; she’s also released several albums. Most recently she released a 20 track live album in the summer of 2015, recorded while doing what she loves: performing for people.

Gent “finds great satisfaction in playing her own songs, on instruments she made herself, getting feedback from people and selling a few CD’s.” You can find her on Cigar Box Nation and YouTube, and buy her original music at https://bemuzic.bandcamp.com/.