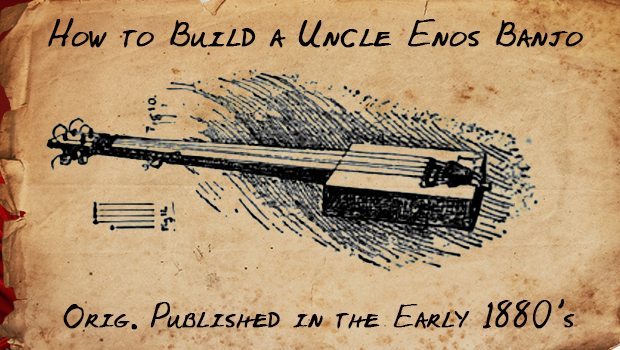 Originally published as Christmas Eve with Uncle Enos in newspapers in the early 1800’s.  First book appearance in 1884, as printed in The Book Buyer 1884-1885.  These plans would eventually be published in Beard’s American Boys Handy Book in 1882.

A.  On the original design:  Daniel Carter Beard’s original plans call for a cigar-box, a broomstick, a bit of an old shoe, and a piece of clapboard.  Clapboard (pictured to the right) is a long, thin, flat piece of wood with edges horizontally overlapping in series, used to cover the outer walls of buildings.  One possible substitute is spruce pine furring strips sold at major hardware stores.  Another is simply 1×4 poplar or maple planks.

B.  Merlin Miller from Alabama has build a faithful version of the Uncle Enos Banjo.  See the full story here. 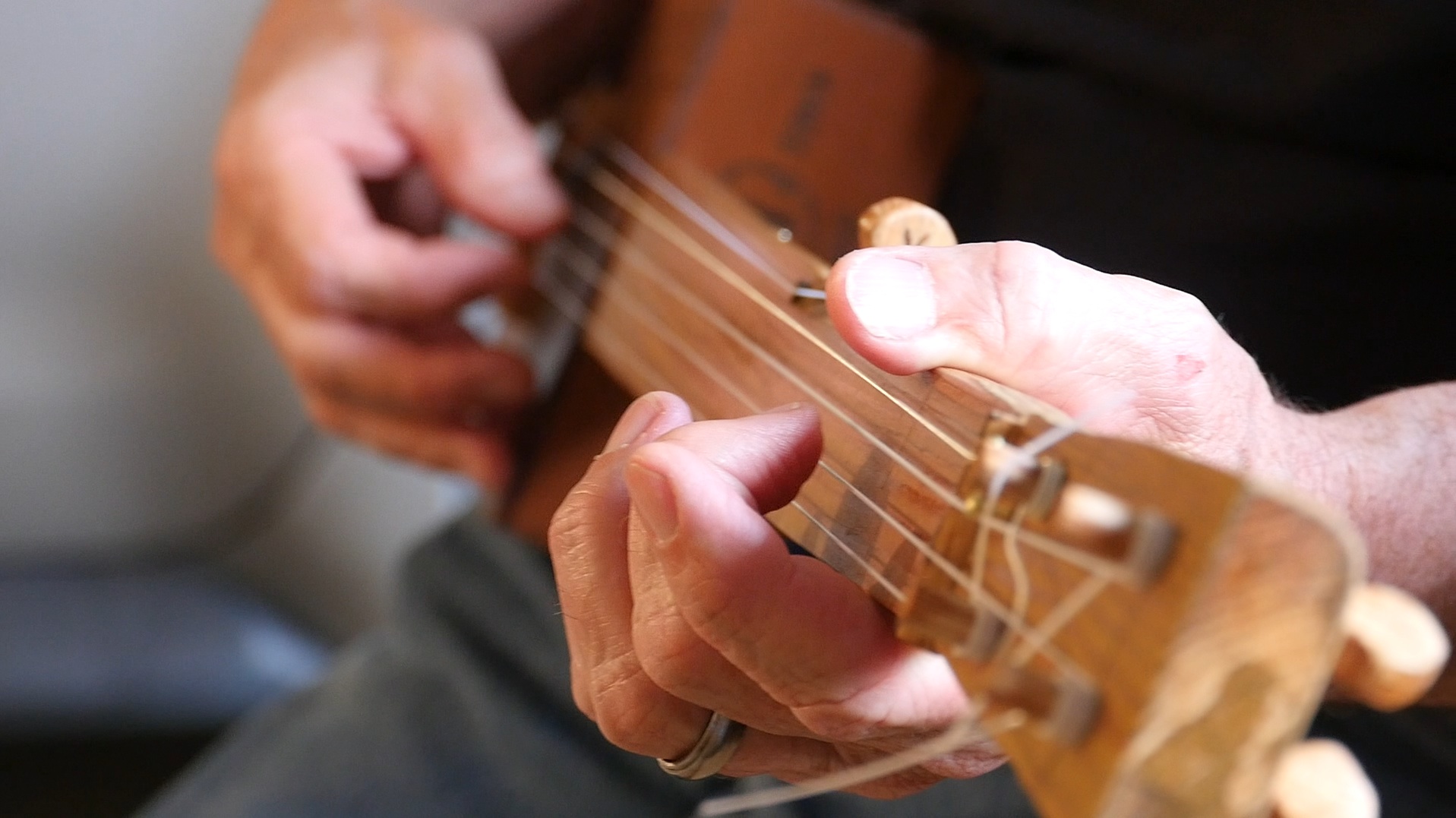 C.  The original plans call for carved tuners.  I have made notations that suggest modern geared tuners would work on this build.  However, the period-correct version should have carved tuners if it is your goal to make an authentic 1800’s cigar box banjo.  Further reading: How to Make Tuning Pegs from Scrap Wood

Fig. No. 1 shows the cigar-box, with holes bored through the ends for the stick, that supports the neck, to pass through. The bottom of the box is used for the top to the banjo. The lid of the box may be left on, so that it can be closed or opened, as the taste or ear of the banjoist may direct.

Fig. No. 2 represents a pine board with a plan of the neck drawn upon it, ready to be sawed out.

2. DRILL TUNING PEG HOLES:  Mark the spots where holes are to be bored through for the key to turn in.

3. CUT THE NUT SLOT:  The place for the low bridge that separates the strings before they enter the keys is marked by the dotted lines at a ; a rectangular slot should be cut here to fit the bridge (Fig. 5) into, as shown by the side-view of the neck (Fig. 9) ; b

5. SHORT BRIDGE FOR 5TH STRING [Note: you could easily just place a flat head screw at this position so that the string follows the slot.]  The slot for a small bridge for the short string of the banjo is marked by the dotted lines at c (Fig. 2). This little bridge is fitted in the slot, as shown in the side view (Fig. 9).

6. FIT THE BROOMSTICK THROUGH THE BOX Fig. 3 shows the broomstick, whittled down at one end, so as to fit the holes bored in the cigar-box, through which it must pass and protrude about one-half inch at the butt. The top to the upper part of the broomstick is smoothed off flat, so that the neck (Fig. 2) may be securely screwed on to it, as is more clearly shown by the side-view (Fig. 9).

7. CARVE THE TUNING PEGS Fig. 4 shows what shape to make the keys. The latter must have holes (just large enough for the banjo strings to pass through) bored near the ends, as shown by the diagram. The keys may be made of any kind of wood-hard wood is the best.  [Or as mentioned above, just use store-bought tuners]

8. FIT THE NUT INTO THE NUT SLOT  Fig. 5 shows the bridge that fits into the SLOT A (Fig. 2) already described.

9. MAKE A SMALL METAL CORNER FOR STRINGS TO PASS OVER AT THE BUTT.  THIS WILL PROTECT THE BOX.  Fig. 6 is simply a piece of tin bent into the shape shown in the diagram, and made to fit over the butt-end of the banjo for the wires of Fig. 7 to pass over when the latter is put in place (sec Fig. 10).

10.  TAILPIECE: Fig. 7 is a piece of hard wood (Uncle Enos used leather), with five small holes bored through it for the attachment of the banjo strings, and a wire loop at the end that passes over the piece of tin (Fig. 6) and is held in place by the tension of the strings and the protruding end of the broomstick at the butt of the banjo (Fig. 10).

11.  CARVE A BANJO BRIDGE OUT OF SOFT PINE.  The bridge proper is shown by Fig. 8. It may be cut from a piece of soft pine in a few moments with a pocket-knife. Its place is in front of Fig. 7, where it spreads the five strings before they pass over the head and neck of the instrument.

12.  FIT THE BROOMSTICK INTO THE NECK.  ATTACH WITH TWO SCREWS.  FIT THROUGH BOX.  Fig. 9 shows the neck finished and all ready to be fitted to the box. The neck is fastened to its broomstick support by two screws, as may be seen in the diagram.

13.  FINISHED VIEW  Fig. 10 shows the finished instrument, all strung and ready for use.

14.  STRING IT UP.  [You can simply use a standard pack of banjo strings.  We recommend using old fashioned nylon or gut banjo strings because they have less tension on the instrument and they deliver period-correct tone.]  Fig. 11 shows the arrangement of the banjo strings. The shortest string on a banjo is the 5th. And now we have reached the part where the boy who wants to make an Uncle Enos banjo will have to expend a few cents. Go to a dealer, and for the 1st and 5th ask for E strings. Let the first be a little heavier than the 5th. The second should also be an E string, but much heavier than the 1st. For the third, ask for a guitar B string.  The fourth, or bass string, is manufactured especially for the now popular banjo, and care must be taken not to purchase the guitar D for the banjo A. or bass; both strings arc silver, wound on silk, but the latter is much finer wound than the guitar D.

Harry, who is said by Tom and Dick to have a musical ear, made a banjo under the direction of his old friend Uncle Enos, and he says the whole thing cost him but half a day’s labor and forty cents for strings.