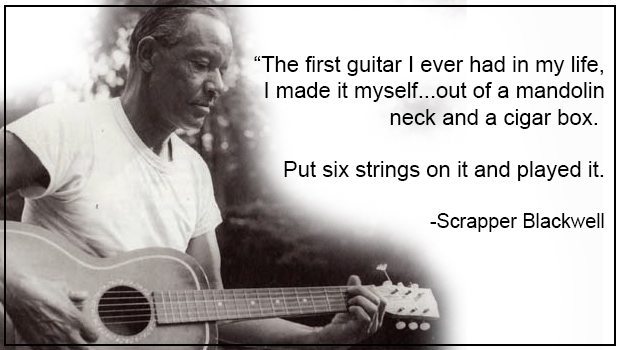 So many great musicians started out on cigar box guitar when they couldn’t afford a real guitar. Sometimes all they needed was a stick, a box and a few strings to get those magical sounds.

In the hierarchy of blues, Francis Hillman “Scrapper” Blackwell is one of the true originators.  Among his many hits in the 1920’s and 1930’s, he wrote and recorded Kokomo Blues, the song that was transformed into “Old Kokomo Blues” by Kokomo Arnold before being redone as “Sweet Home Chicago” by Robert Johnson.

Scrapper Blackwell also started out on a homemade cigar box guitar.  In a 1960 interview with Jazz Monthly magazine, Blackwell retraces his origins and describes his first guitar:

“I could play just as good blind as I could with my eyesight. Wouldn’t make no difference. Piano the same way; ‘cause I know the keys. That’s the difference in knowin’. You’ve heard of blind people play the piano, look at blind, what’s his name, Art Tatum, sure. Blind people play, but they have the gift of God. You got the gift of God, see. Ain’t nobody never told me nothin’ in my life, never showed me anything.

“And the first guitar I ever had in my life I made it myself.”

interviewer: What did you make it out of?

“…When I picked up my first one I played. Not only played it but I made it. Now the first (real) guitar I ever had in my life cost me seven dollars. When that guitar was bought it was the take-off from the crap game. I never gambled a day in my life. But I stayed around them. And they bought the first guitar that I ever played.

“Then when I got this guitar, real guitar, I told you Sevastabule’s [sic – he probably meant Sebastapol, or “open G” tuning] all I know how to play in. And I couldn’t play the blues. Finally I did. When I did went to playin’ the real blues, I was gone too, just gone. Know who learned me that ? Nobody. I t just come to me like anything else. Like you sit here and think about it. Maybe you go get some thin’ next door; come to you while you’re resting. And that’s the way it come to me. And the minute I saw the string, I hit it. And when I hit it, it was the right string. But I couldn’t tell you today how I ever started playing.”