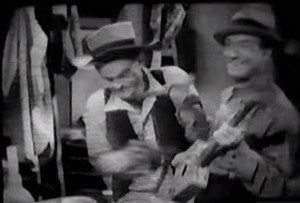 Shane Speal recently discovered a rare appearance by a cigar box guitar in a vintage film clip, this one from a 1942 music video recorded for the Spike Jones song “Pass the Biscuits Mirandy”. According to the Youtube video post, this short film (which really is a precursor to modern music videos) was called a “Soundie” and was made for playing on special jukeboxes. END_OF_DOCUMENT_TOKEN_TO_BE_REPLACED