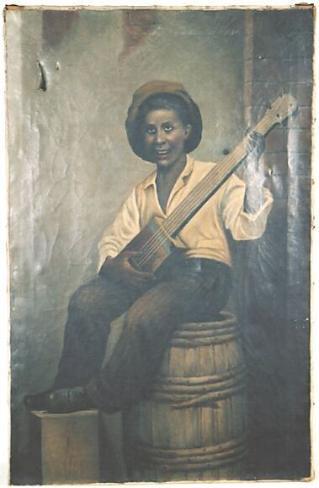 Here is a collection of old drawings, artwork and illustrations displaying cigar box guitars, fiddles and other handmade instruments. Thanks to John McNair of Red Dog Guitars for allowing us to repost many of these photos. John has spent years collecting historic images of homemade and handmade instruments, and we are honored that he has agreed to let us host them here.

A collection of newspaper clippings that mention homemade or handmade instruments in some way.

Shane Speal built his first cigar box guitar back in 1993, at a time when the instrument was a barely remembered folk oddity, occasionally mentioned when talking about how some of the blues greats got their start. From that time Shane has been tirelessly championing the instrument, and the existence modern cigar box guitar movement is largely due to his work.

In this video, Shane talks about how he found cigar box guitars, why they appealed to him, and why 22 years later he still loves to play them. We present this video here for its historic interest.

Here’s something a bit different – a patent that was granted by the U. S. Patent Office in 1936, to one Grant C. Haium of Wisconsin, for a musical instrument formed (according to the drawing) from a pitchfork, tightened string, resonator drum and an interesting slide/resonator box. He even even states that he prefers to use a cigar box as his unique slide/resonator (see quote below)

Here is how the patentee described his creation:

“Being an innovation, and in fact somewhat of a rustic revelation, the structure will be found notable as a unique contribution to the art and trade in that it may be justly accredited as possessing the attributes of an irregular yet practicable stringed musical instrument which though of a limited tone compass is nevertheless usable, in teh hands of an artist, to promote achievement not of a renowned type, but rather of a captivating and humorous character calculated to appeal to a listener moved by the efforts of a humble performer.”

Later, he writes: “The slide [the box with the hole in it shown in the drawing] has an additional function, however, and is in the nature of a sound wave amplifying unit. Under the circumstances, I have found it expedient and practical to use an ordinary cigar box and to fasten the lid closed and to form an opening or outlet in the top thereof. This enables the box to serve somewhat in the capacity of the “body” on a violin or equivalent instrument.”

At the 2015 Winter NAMM show in Anaheim, CA, Shane Speal had a chance to talk to George Benson about his first guitar. Turns out, George and his father built it themselves out of spare parts! While it didn’t involve a cigar box, this is a great example of a now-famous musician getting his start with homemade/handmade instruments. If you can’t afford one (or even if you can), build your own!

Here is a collection of photos from the World War I era (1914-1919 or so). Most of them are from Europe, and show soldiers on both sides of the fight who have formed impromptu bands, which include at least a couple of homemade/handmade instruments. In addition to box guitars and other oddities, a favorite of the time appear to be longer-scale cello-like instruments, having a tin can resonators (Hugo informs us this is likely a “Vozembouch”, a traditional Czech instrument – see comments below).